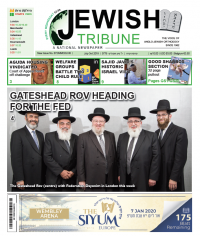 Gateshead Rov is heading for new role in London

The Federation of Synagogues this week announced the appointment of Rav Shraga Feivel Zimmerman as its Rov and Av Beis Din. It follows the announcement of the retirement of Rosh Beis Din Dayan Yisroel Yaakov Lichtenstein. Rav Zimmerman met last Sunday with the Federation’s representative council, in addition to its Trustees and some of its rabbonim. This followed a meeting last week with the organisation’s dayonim.
Rav Zimmerman’s move to the Federation comes after 11 years as the Rov of Gateshead. A talmid of the Mirrer yeshiva, Rav Zimmerman served as a dayan for the Kehal Adass Yeshurun kehilloh in Washington Heights, and later as Rov of Khal Bnei Ashkenaz of Monsey.
Rav Zimmerman’s appointment marks the end of an era for the Federation, which Dayan Lichtenstein has served for over three decades. He joined the organisation as Rosh Beis Din in 1988, shortly after its centenary year. Over the past 31 years, he has focused his dayonus on improving standards, particularly in kashrus and shechitah, the beis din, and the chevra kadisha.
Andrew Cohen, President of the Federation, said: “This appointment marks a major milestone in the renaissance of the Federation as a primary communal organisation in North West London and beyond. Rav Zimmerman is acknowledged as one of the most influential leaders and poskim in this country and he will provide the Federation and the wider London community with a transformed level of Rabbinical authority and leadership. He will also be tasked in driving forward the vision and strategic growth of the Federation and enhancing its rapidly expanding range of valued communal services. This appointment is a recognition and endorsement of the significant achievements of the past five years and we are truly excited at the future prospects under his leadership and guidance.”
Rav Zimmerman commented: “It is an honour to have been appointed as Rov and Av Beis Din of the Federation. Besiyatoh dishmayoh I look forward to building upon the achievements of my predecessors and fellow dayonim, and to work with them to continue serving klal Yisroel.”
Rav Zimmerman will take up his post at the Federation over the course of the coming year.