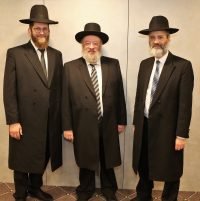 The Federation offered northwest London locals the opportunity to make the most of the August Bank Holiday Monday by holding a busy Yarchei Kalloh in Golders Green entitled ‘Cheshbon Hanefesh before Yom Hadin’. The event’s theme and purpose was: ״נחפשה דרכינו ונחקרה ונשובה עד ה׳״ – that a prerequisite of doing Teshuva is to sincerely consider where we might have strayed and only then can we seek to rectify our ways.

Dayan Y Posen spoke about the regularly occurring situations in which one may inadvertently transgress the prohibition of Ribbis as well as common misconceptions on the differences between renting and borrowing.

Dayan Y Hool’s shiur was on Gezel, and he began by noting its specific inclusion in the viduy, as opposed to most of the other items of confession which are of a more general nature. Dayan Hool brought to the audience’s attention a variety of everyday scenarios in which one might transgress the issur of Gezel, just one example being the importance of giving one’s full time and attention to one’s employment, and not wasting time that one is being paid for with private matters (such as constantly checking social media etc.). He also highlighted the importance of making a Kiddush Hashem by being honest and correct in business dealings with non-Jews.

Federation Rov and Av Beis Din, Rav S F Zimmerman spoke on the halochos of Amira L’Akum and distinguished between the situations covered by the prohibitions of “Dabeir Dovor” and “Mechzei K’Shluchoi” with their various applications in modern life. The Rov concluded the event with divrei hisorrerus, explaining the words ״אשרי העם יודעי תרועה״ based on the Yaaros Dvash that by blowing the shofar we call for the din upon ourselves so that we can proclaim the malchus of Hashem which is established through judgement.