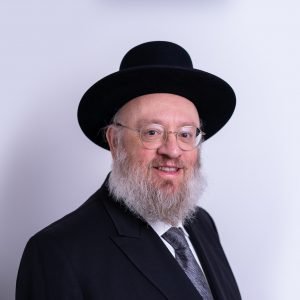 A native of New York, Rav Shraga Feivel Zimmerman is a talmid of the Mirrer yeshiva and of Rav Dovid Soloveitchik’s Brisk, in Yerushalayim. Rav Zimmerman has previously served as a dayan for the Kehal Adass Yeshurun kehilloh in Washington Heights, and later as Rov of Khal Bnei Ashkenaz of Monsey. In 2008, he was brought to the UK to fill the prestigious position of the Rov of Gateshead, and for the next 11 years provided strong, effective leadership and guidance for that community, with far-reaching effects throughout the UK. In June 2019, it was announced that Rav Zimmerman would soon become the Rov and Av Beis Din of the Federation and he has formally started in this position in January 2020.

Rav Zimmerman is acknowledged worldwide as a respected and influential leader and posek.  In his role as Rov and Av Beis Din of the Federation, the Rov will spearhead the organisation’s Beis Din and Kashrus activities as well as its rapidly expanding range of valued communal services.