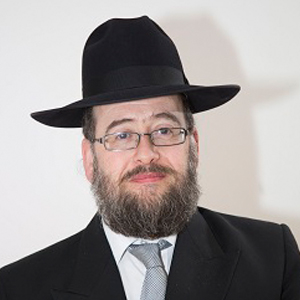 Rabbi Roberts was born in Sunderland and was brought up and educated in Gateshead, attending school and yeshiva there followed by Brisk Yeshiva in Israel. He lived in Gibraltar on getting married, returning to England in 2001 to take over the position at Kehillas Netzach Yisroel.

While in Gibraltar he founded and headed a boys’ high school, headed the girls’ high school and worked as a youth leader.

Since returning to the UK, in addition to the leadership of Netzach, Rabbi Roberts has been appointed Principal of the Menorah Foundation Primary School, works as a Rebbe in the Hasmonean ‘Beis’ (sixth form boys) programme, is the Rabbinic Liaison for the Ezra Youth Movement in Edgware and lectures for a range of organisations including the PBM in the city, Chazon and Torah Way. He also provides Halachic guidance to Hatzola Edgware.

Since 2015 Rabbi Roberts has also held the position of Director of Education at the Federation.