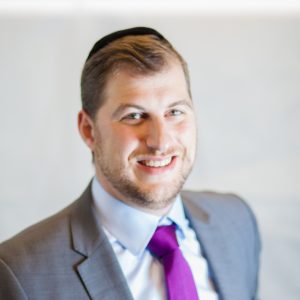 Moshe Winegarten is a fifth generation Federation member; each generation has taken active and leading roles in their communities. Moshe lives in Hendon with his wife and five children. He attended Gateshead Yeshiva and Torah Ohr Kollel, before embarking on a career in Business Strategy and Product Development. In his recent role at Visa, he developed a key commercial product which is now used internationally. Moshe brings many of his professional skills to the Federation, including his ability to lead teams and meet challenging situations head-on. He is particularly talented at identifying models which are not working well and developing or optimising them to become more successful, often designing new complementary products along the way. This was the mindset behind Shailatext and Maasertext – both Moshe’s creations, which were born out of engagement with the public, recognising their needs and crafting a solution which brought the age-old practice of answering shailos to a modern and high-tech setting, making halacha accessible to Orthodox Jews in modern Britain.