Beis Hamedrash Nishmas Yisroel marked the conclusion of Masectha Bava Kama with a special Siyum on 19 December. This is the 4th masechta the kehilla have been mesayeim in their unique Bekius programme which seeks to cover 10 daf a month. Lomdim have the choice of attending an early morning shiur at 6:30am each weekday morning covering an Omud a day or,  a twice-weekly evening shiur keeping to the same schedule. Both shiurim are given by the kehillas popular Rov, Rabbi Dovid Tugendhaft and the shiurim are recorded so they can be shared with those unable to attend or for chazoro.

Mr Yanki Ostriecher, one of the mesayemim and a Board Member of the shul completed the Hadran in front of a busy crowd who enjoyed a sumptuous meal catered by Deli 98. After the Hadran, Mr Ostreicher presented the Rov with a beautiful set of leather bound machzorim and a silver megila holder which was donated by the shiur participants as a measure of hakoras hatov for their Rov.

The oilam were spoilt for choice with an array of  guest speakers including Rabbi Eliezer Rottenberg who gives a weekly Sfas Emes Shiur in the shul as well as Rabbi Yakov Behrenfeld from Lakewood who is the Worldwide Director of Operations for the Adopt a Kollel organisation.  The keynote address was delivered by Rabbi Dovid Roberts, Rav of Kehillas Netzach Yisroel in Edgware as well as Director of Education at the Federation of Synagogues of which Nishmas Yisroel are constituent members.

The kehilla have continued in Seder Nezikin having started masechta Bava Metzia this past Monday and plan to be mesayeim in a year’s time to coincide with the 13th Daf Yomi Siyum. 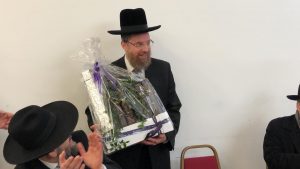 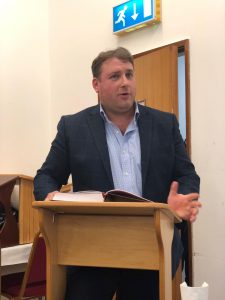 On the 7th of November the ladies enjoyed a trip to the British Museum led by Rebbetzin Tugendhaft, in honour of Rosh Chodesh.

In November/December we hosted the inaugural series of shiurim of the Federations Mishpot Votzedek initiative.

We also launched our new Ovos Uvonim programme with branded membership cards and lanyards for all the boys, amazing raffle prizes and regular pizza and chips. Each boy got a Nishmas Yisroel branded fidget spinner. Please see photo below. 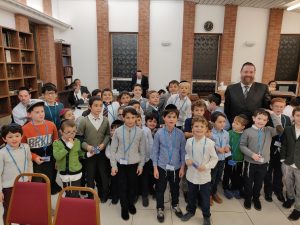 The last 3 months in Ilford have been very exciting. It started in November when we hosted a local primary school to a morning of learning which they highly enjoyed. On the 24th our shul was selected for the annual Chevra Kaddisha dinner with guest speakers Mr Sinitsky and the heads of the federation Chevra. Erev Chanukah all residents over 75 years old were invited to a Chanukah party, with the Rabbitzen baking over a hundred doughnuts for the tea. The following week was the wedding of a previous warden, Leslie Wajchendlar, to Yvonne Shutter. The shabbos of that week was a lunch after the service for two more much loved members of the community, Tony and Gloria Rones, to celebrate their 55th wedding anniversary. December 15th saw the annual shabbaton with Rabbi Singer’s son Rabbi Singer jr. as guest speaker.

The Melava Malka was greatly enjoyed by nearly 100 people. The singing was provided by our own Rabbi Singer and the speaker was Rabbi Shmuli Sagall. He spoke about Moses’ staff, starting with it possibly being in Birmingham Museum and then looking at the number of times it is mentioned in Torah. Everyone present was fascinated by the topic. Dinner was three fish courses making the evening a huge success. 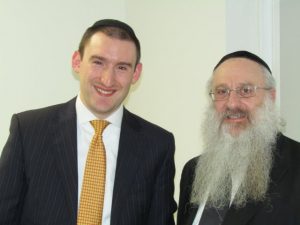 On מוצאי שבת פרשת וארא Netzach held a מלוה מלכה for בת מצוה girls and their mothers. The מלוה מלכה was the closing event of a new בת מצוה programme that started in November 2017. The girls learned about a wide range of topics, like the מדות of חסד and אמת and the הלכות of בדיקת תולעים, טבילת כלים, יחוד and of course הפרשת חלה etc. All of this was supported by hands-on activities and some outings.
At the beautifully decorated מלוה מלכה, the concept of being part of a chain of mothers and daughters in כלל ישראל was stressed and both the girls and mothers got the opportunity to express how they hope to pass on what is important to them to the next generation.

We had a big do for Sammy Ebrahimoff ‘s 60th birthday – with over 60 people attending and a 3-course Shabbos lunch to celebrate.

More recently on 25th January we themed our Friday night as a Burns Night including kosher haggis delivered from Mark’s Deli in Glasgow.

Tales from the Beis Din

Attendees listened with interest during talks from Dayan YY Posen, Dayan Y Hool and Rabbi YM Guttentag for this fascinating and insightful 3 part series, giving a peek into the inner workings of a Beis Din and Kashrus Authority.

On the 2nd of February we have a learning Shabbos commemorating the 5th Yahrzeit of Dayan Lopian zt”l.

Also, on the 3rd of February the Siyum Hashas is taking place in the Yeshurun, on conjuction with Kollel Beis Aharon.