Hamaor Community – News, May to October 2018

In June, Rebbetzin Goldie Junik held a 6-week series on a refresher course of Taharas Hamishpacha.

The Ladies enjoyed a Shabbos Farbrengen in honour of Gimmel Tammuz (this year, the 24th Yahrtzeit of the Rebbe) with Mrs Sara Osdoba, certified professional coach and Hypnotherapist.

Farbrengen with Rabbi B Levin

The Men had a Farbrengen on Gimmel Tammuz with Rabbi Baruch Levin who shared beautiful stories and teachings as well as explaining how we can apply these valuable lessons in our own lives.

Beis Gavriel’s Men and Women had an inspiring shiur with Rabbi Alon Anava called “Reigniting the Spark” on the topic of how to rediscover your passion for Judaism.

One of Beis Gavriel’s esteemed trustee and pioneer of the Kehillah, Pesach Davidoff, emigrated to America with his wife Chanie and their cherished family in early August. The Shul members hosted a Farewell Shabbos Lunch in honour and appreciation of the Davidoffs and spoke of their gratitude and good memories.

Mazal Tov! Beis Gavriel has moved to its new permanent home on Sunningfields Road in August! The building is intended to be a spectacular community center which will be thriving 24/7 with the Shul, nursery and communal activities for all ages.

Beis Gavriel Shul held a Board of Management Volunteers Meeting on Thursday 4th October 2018 which encouraged members to put themselves forward for charitable roles in the Shul. “To keep moving forward each of us needs to give support, to stand up and be counted, to participate and be responsible…” were the words of Rabbi Menachem Junik. Mendy Freundlich, the Shul’s President and a Trustee, described the virtues of society where there are high levels of volunteers – they are better, happier and more fulfilled – because volunteering changes the world and also benefits the volunteers. This is at the heart of Jewish communities. B”H it was a successful meeting with many people kindly offering their time and skills to help develop and actualise the potentials of the Shul and its kehillah.

Nishmas Yisroel had two opportunities this summer to welcome the renowned speaker Rabbi Shraga Kallus. Rabbi Kallus, whose Kollel Ateres Sholom is partnered with Nishmas Yisroel under the “Adopt-a-Kollel” initiative, addressed a packed crowd on Shabbos afternoon to give a pre-Shavuos shiur. The Rosh Kollel returned again later in the summ 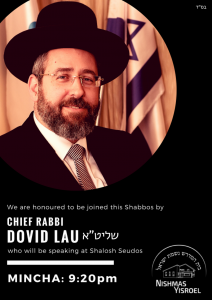 er during which he participated in a special Shalosh Suedos to strengthen the bond between the two organisations.

The kehillah was honoured to welcome Chief Rabbi of Israel, Rabbi Dovid Lau who spoke during Shalosh Seudos on Shabbos Parshas Matos Masei. Rabbi Lau had visited the shul previously and spoke about his excitement at returning to the world famous Nishmas Yisroel Shalosh Seudos.

Launch of the Rosh Chodesh Club

June saw the launch of the Rosh Chodesh Club, an exciting new opportunity for boys and girls from year 7 and over to spend some time with the Rov & Rebbetzin respectively. The boys enjoy a monthly “shmuz” with a bowl of cholent and kigel. The girls enjoyed a Challah Baking session with Rebbeztin Tugendhaft.

Inauguration of the new Rabbi 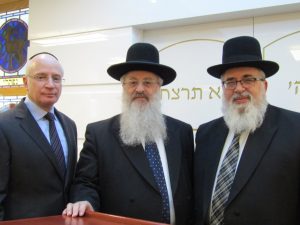 On Sunday October 21st Ilford Federation Synagogue held the induction of Rabbi David Singer in the presence of Dayan Lichtenstein, Dayan Hool, Dayan Posen, the  President of the Federation and the family of Rabbi Singer. Dayan Lichtenstein stressed that it was important to accept the teaching of a Rabbi without question and that a Rabbi must always be aware that his good name is more important than any other “crowns” (Torah, priesthood and kingship). He also mentioned that every past Rabbi in Ilford had been very happy as was the community with their rabbi. The afternoon ended with a generous reception.

Tour of the British Museum

With an amazing up take for this event an additional trip was arranged for the following week too. Led by Rebbetzen Shoshana Tugendhaft we experienced the four very different cultures that first subdued and then attempted to absorb the eternal people. Surround yourself with artifacts hailing from a glorious past and imagine the long journey of our people through Babylon, Persia, Greece and Rome.

With amazing guest speakers Dayan Yehoshua Posen and Rabbi Akiva Tatz. Dayan Y Posen spoke on “Let’s make this Rosh Hashanah different” and Rabbi A Tatz spoke on “New Year, New You”.  Both speakers gave inspirational and entertaining shiurim and gave us all something to takeaway with us for the Yomim Noraim.

The Yeshurun have just launched its Education and Events Booklet, filled with amazing events and shiurim for Autumn/ Winter 2018/5779. which started with a very successful  communal Succah crawl. In November we hosted a Gala Friday Night Communal Shabbos Dinner with guest speaker Edwin Shuker. We also had a 3 part series on Justice – “The Moral Maze” with speakers Rabbi D Rowe, Rabbi D Roberts and Rabbi Y B Lieberman.

Finally in December Chanuka Melava Malka with entertainment from Avi Liberman  a Jewish Comedian from the US.