Hamaor Community – News, February to May 2018

In the past quarter, Kehillas Netzach Yisroel organised some very successful initiatives including a sold out Purim party with a drumming workshop and great refreshments, the introduction of a Bas Mitzvah programme, a trip to the matzah bakery in Stamford Hill and the launch of  a new weekly gemorrah learning programme for men. In the run from Pesach until Shavuos there were special programmes such as six amazing shiurim given on Pesach by young men who had grown up within the Kehillah and were now back from Yeshiva for Yom Tov; a series of shiurim given by Rabbi Roberts on Shabbos afternoons entitled ‘The Sefiros behind the Sefirah’; and a fabulous tikkun leil on Shavuos attended by almost 100 men and women, with a separate programme for teenage boys.

The shul organised a matzo baking chaburah, which was joined by Dayan Ehrentreu. 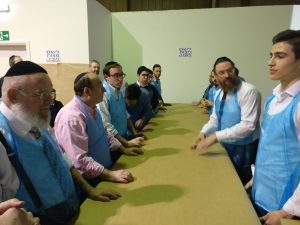 In February, the shul organised a yahrzeit seudah for Reb Shayale of Kerestir, which was followed by a trip to Kerestir, on which the members were accompanied by Rabbi Bixenspanner.

The Dzikov Viznitzer Rebbe honoured the shul with a visit on Shabbos Tazria Metzora, which became a very unique and uplifting Shabbos.

On Lag B’Oimer, there was a big medurah. The shul was joined by renowned author and speaker Rabbi Zwecker from Eretz Yisroel. There was popcorn and candyfloss for the kids. 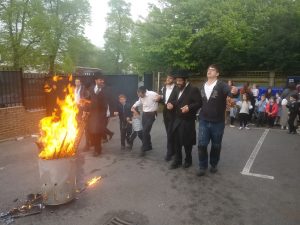 Over 90 people attended a themed evening of fun and games, organised by Rabbi and Rebbetzin Landau.  Starting with a buffet dinner then from decorating a cake to guessing which film the music was from.

Over 100 people attended our annual Shabbos Hagadol lunch with a dvar Torah given by Philip Baigel to get everyone engaged for Pesach!

At the start of February the shul put on the film “The Freedom Writers”, which was not only moving but gave rise to much thought about the current situation in the UK with gangs. The film was followed by a milchig supper.

Purim was as lively as usual with many megillah readings in the neighbourhood in spite of the ‘Beast from the East’.

Welcoming the new Rabbi and Rebbetzin

Shabbas Parah was chosen to welcome Rabbi and Rebbetzin Singer to Ilford and to meet as many members of the community as possible.

Rabbi Dror Shaul- Director of Chabad House Dharamsala was invited as a special guest, to speak on the topic of “Spiritual and mental growth without suffering- is it possible?!”. Rabbi Dror was said to be very inspiring and empowering.

The Topic: “Three day Yom Tov. How to do it Halachikly and practically?” and then Ladies’ Pre-Shavuos Shiur with Goldie Junik. 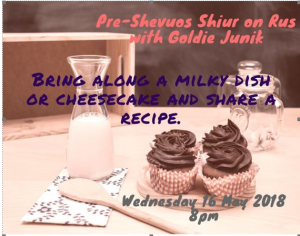 Hachnosas Even HaPinoh- flyer and photo from article PDF and article excerpt below.

“In a moving ceremony, young and have old joined together for the hanochas even hapinah of the new premises of the Federation’s Beis Gavriel- Lubavitch shul and Gan Menachem kindergarten in Hendon. In attendance were prominent leaders of both the Federation and the Lubavitch movement. Dayan Yisroel Yaakov Lichtenstein, Rosh Beis Din of the Federation, paid tribute to Rabbi Menachem Junik’s role in this astounding success story. “As the communal leader of the shul, Rabbi Junik has drawn many people closer to Yiddishkeit through his warm and welcoming approach,” enthused the Dayan. The campus is to be a state-of-the art centre, catering to many varied needs within the community; the hub of much Torah learning for all levels and will even include a specialist facility for victims of abuse. President of the synagogue, Mr Mendy Freundlich, elaborated on the design plans, “we hope eventually to be able to build a mikvah and apartments for the disabled members of the community who want to be near a local shul, for whom there is currently no provision”. Mr Andrew Cohen, President of the Federation commented, “It was a privilege to be present at the event, at which a vibrant and diverse membership attended in their numbers to celebrate the kehilla’s great milestone… I look forward to a continued fruitful partnership between the Federation and Beis Gavriel.” 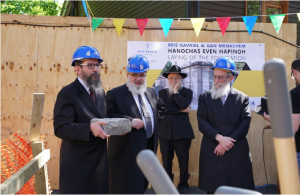